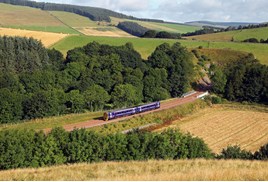 Reliability problems with ScotRail Class 158s and shortages of traincrew have combined to hit performance on the Edinburgh-Tweedbank Borders Railway.

According to analysis seen by RAIL, at least one train has been cancelled on 74 of the 143 days between March 31 and August 20.

Rail campaigner Bill Jamieson has monitored daily performance on the route since October 2015. His analysis suggests that among the principal reasons for cancellations, crew shortages (sometimes combined with other issues) have caused severe disruption on 14 days, Class 158 reliability issues on 18 days, and signalling failures on nine days.

ScotRail Operations Director Perry Ramsey says the company has identified a fleet-wide issue with the Class 158s that affects them particularly badly during hot weather.

Under heavy load, such as accelerating on steep gradients, the engines can overheat and shut down, leading to disruption.