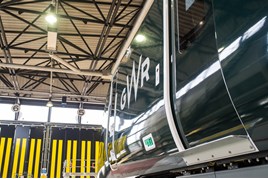 The five-car bi-mode train (800004) is the first of 86 trains ordered for the Great Western franchise. The trains will enter traffic from July 2017, introduced initially on services to Bristol and South Wales.

A major timetable change is planned for 2018, and by the end of the GWR franchise the IEP and AT300 fleets will have replaced the five Class 180s and 54 High Speed Trains.

They are being built by Hitachi, and are owned by Agility Trains. Depots for the fleet have been constructed at Swansea and Stoke Gifford (Bristol), while Hitachi has taken over the former Eurostar depot at North Pole to house the IEPs.

Watch a 360 video of the train's interior.