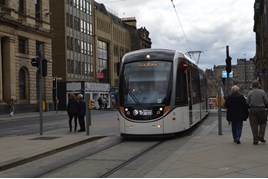 Edinburgh Trams reported a 9.3% increase in passenger numbers in its second full year of operation.

Increased revenue has surpassed budgeted expectations by around 6%. The company’s performance for the 2015 financial year is to be released in the summer.

Concessionary card holders account for 8.2% of passengers. This is thought to be down to the accessibility of the network and the work done by Edinburgh Trams with user groups. The network began operation at 0500 on May 31 2014.

Edinburgh Trams General Manager Lea Harrison said: “We’ll continue to work hard at providing the best possible service and to introduce further improvements to encourage even more travellers to hop on board.”

Transport for Edinburgh Chief Executive George Lowder added: “These results are hugely encouraging. We are concentrating this year on enhancement of the existing service and are certainly not going to be complacent.”

Councillor Lesley Hinds, Chair of Transport for Edinburgh, concluded: “There is no doubt Edinburgh Trams is going from strength to strength, as these latest passenger figures show.”