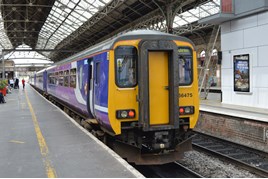 Both the new Northern and TransPennine Express franchise proposals “were subjected to a financial robustness test as part of the bid evaluation process, and considered low-risk by the Department for Transport”, Transport Minister Andrew Jones has revealed.

Jones explained: “The successful bids are backed by significant parent company support, which can be called upon in life to ensure the liquidity ratios are met.

“Revenue risk for these two franchises lies with the franchisee, not the Department. This means the Department is not responsible for covering any shortfall in farebox revenue compared to the successful bidders' expectations.”

Jones was replying in a Commons Written Answer on January 5 to then-Shadow Transport Minister Jonathan Reynolds (Labour, Stalybridge and Hyde), who had asked what contingency plans the DfT has for the funding of the new franchises in the event that projected passenger number increases are not achieved.