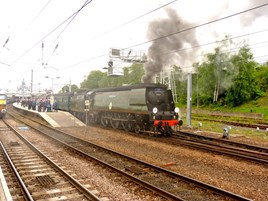 Criminal proceedings have been launched today (December 9) against charter operator West Coast Railway Company and one of its drivers, with charges relating to breaches of Health and Safety law.

The Office of Rail and Road (ORR) has also begun the process to revoke the operator’s safety certificate, which WCR requires to operate trains on the network.

The ORR is prosecuting WCR following an investigation into an “extremely serious” incident on March 7 2015, in which steam locomotive 34067 Tangmere passed a signal at danger near Wootton Bassett junction (Wiltshire). The train stopped 550 metres after the signal, across the junction on the Great Western Main Line, directly in the path of high-speed trains.

West Coast Railway Company is facing charges under section 3(1) and 2(1) of the Health and Safety at Work Act 1974, for its alleged failure to implement managerial controls, procedures, training and monitoring to prevent staff turning off the Train Protection and Warning System (TPWS) equipment.

Separately, the driver of the train is facing charges under section 7(a) and 8 of the Health and Safety at Work Act 1974, relating to his alleged intentional misuse of the TPWS equipment. In an official release, the ORR says its investigation found that the driver directed a colleague to turn off the essential safety equipment, which is designed to apply an emergency brake if the driver makes an error.

The first hearing is expected to take place at Swindon Magistrates’ Court on January 11 2016.

“There have been a number of incidents over the past year involving West Coast Railway Company trains,” said Ian Prosser, HM Chief Inspector of Railways.

“The incident at Wootton Bassett junction, where a WCR train passed a signal at danger, was caused by alleged misuse of a key safety system. This could have easily led to a catastrophic train collision.

“ORR inspectors are working with the rail industry, in particular the heritage sector, to ensure that lessons are learned, and public safety is not put at risk.”

Following the incident on March 7, ORR started the process to revoke WCR’s safety certificate, which then led to an improvement notice being issued on the company. Network Rail separately temporarily restricted the operator’s track access to the main line network.

On November 24, ORR prohibited WCR from operating steam locomotives on the network, but has since given restricted permissions for certain locomotives to run that have effective controls in place for key safety systems.

The prohibition was issued following news that a WCR steam footplate crew had disabled locomotive 45231’s TPWS on October 2 at a signal on the Up & Down Hexthorpe Goods Chord, which connects to the East Coast Main Line just south of Doncaster.

WCR Managing Director Pat Marshall released this statement: "West Coast Railways has been advised that the Office of Rail and Road has decided to commence proceedings under the Health and Safety at Work Act 1974 following the Signal Passed at Danger at Wootton Bassett in March.

"WCR has co-operated fully with the ORR’s investigation as safety remains our paramount priority. Since the incident we have worked hard to ensure that we have learned lessons to enhance our safety performance.

"At this time we have not received any papers from the ORR in relation to the prosecution and therefore we are unable to comment on the proceedings."