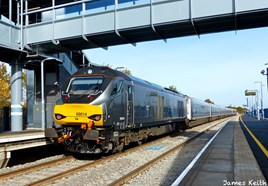 Fearing a delay of up to seven years in the completion of Phase 2 of the East West Rail Western Section, as a possible fallout from the Hendy report into Network Rail’s future enhancement programme, the East West Rail Consortium has lobbied Government stressing the project’s economic benefits.

Phase 2 of the Western Section will provide a high-quality railway linking Oxford and Aylesbury with Bletchley and Bedford. It is presently due to be completed in 2019 (RAIL 780).

In early November, the Consortium said it understood that Network Rail’s recommendations to the Hendy review are for the project to “be delivered in three phases - with Bicester to Bedford being rescheduled for completion in 2022, Aylesbury to Milton Keynes in 2024, and enhancements to the line between Aylesbury and Princes Risborough in 2026. The recommendations are understood to be based on both cost and deliverability issues.”
Rodney Rose, deputy leader of Oxfordshire County Council and chairman of the EWR-WS Joint Delivery Board, said: “We want to understand Network Rail’s position, and to stress the critical importance of EWR to the local and regional economy.

“There is real concern about the effect on economic momentum if EWR isn’t delivered on time, and risk to investment in Oxfordshire, Buckinghamshire and Bedfordshire. To this end, we have sought discussions with Sir Peter Hendy and Network Rail Chief Executive Mark Carne.

“Before any decisions are taken, we need to ensure that the Government is fully aware of potential implications that any delay could have on the economy, job creation and planned housing growth. One counter-recommendation (to reduce costs) would be to defer proposed electrification of the Oxford-Bedford line, and start passenger train services using diesel trains.”