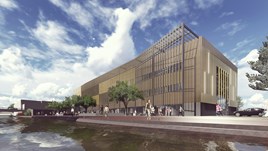 Designs have been unveiled for the National College for High Speed Rail in Birmingham, which is due to open its doors to students in September 2017.

Members of the public were invited to comment on the designs at three events (Faraday Wharf, Innovation Birmingham Campus on November 5 and Lancaster Circus on November 6 and 9), ahead of a formal planning application being submitted by HS2 Ltd to Birmingham City Council.

The 5,700 square metre building will span three storeys on the site of the former Birmingham Science Park (off the A4540 Dartmouth Middleway and Lister Street).

It is expected that a decision on the planning application will be received in March 2016. Subject to approval, construction will begin in April 2016.

Specialist vocational training for future generations of engineers will be provided at the college, with the intention of developing skills not only for HS2 but also for other major rail and infrastructure projects.

“Birmingham is at the heart of the HS2 development,” said leader of the council Sir Albert Bore. “Our plans for wider regeneration and job growth through key sites such as Curzon station, UK Central and the maintenance depot at Washwood Heath are advancing at some pace.”

He continued: “The arrival of the National College for High Speed Rail will help deliver the education, skills and apprenticeships required to build, run and maintain HS2.

“Once the college opens in Birmingham, it will be pivotal in providing the digital engineering and advanced construction skills needed by the rail sector and future infrastructure projects. I would urge young people, parents, careers advisors and teachers to think about how they can get involved and make the most of this new college, starting with feedback on its design.”

Birmingham is also the site of HS2 Ltd’s construction headquarters at Two Snow Hill, where up to 1,500 jobs are being created - including civil, rail and site engineering and design, project management, procurement and health and safety.

The National College for High Speed Rail is being developed in partnership with the Department of Business Innovation and Skills (BIS), Department for Transport, Birmingham City Council, Doncaster Council and HS2 Ltd.