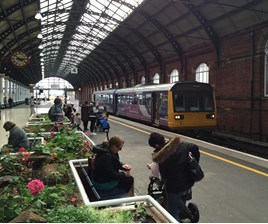 London Overground is the operator with the lowest age of rolling stock (4.7 years), while the oldest fleet is Merseyrail’s, with an average age of 36.3 years.

The figures are correct to the end of 2014-15, according to a report published by the Office of Rail and Road (ORR) on October 29.

“These figures are not particularly surprising, as we know thousands of passengers are travelling on trains simply not fit for purpose,” said Campaign for Better Transport Public Transport Campaigner Martin Abrams.