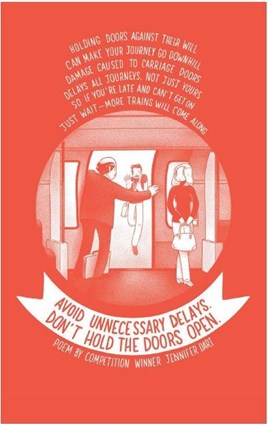 Jennifer Dart, from Rayleigh in Essex, is the winner of Transport for London’s passenger awareness poetry competition.

Dart wrote her poem about how people can cause delays on the Underground by holding train doors open before departure. The poem reads:

Holding doors against their will
Can make your journey go downhill
Damage caused to carriage doors
Delays all journeys, not just yours
So if you’re late and can’t get on
Just wait – more trains will come along

“I travel on the Tube and love the TfL etiquette campaign - it’s such a creative way of communicating a simple yet important message,” she said.

TfL organised the competition to raise awareness for its Travel Better London campaign, in which the Mayor of London has pledged to reduce journey delays by 30% by the end of 2015. Over 6,000 entries were sent in on topics such as littering, priority seating and allowing others off the train before getting on.

The poem will be displayed on posters across the London Underground network.