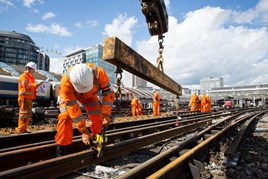 A full programme of engineering work across the rail network is planned for the Bank Holiday weekend after Network Rail made the decision to go ahead with its original plans.

Work on the Great Eastern, Great Western, Midland and West Coast Main Lines as well as the Thameslink route and in Scotland will take place following the decision by the RMT and TSSA unions to suspend industrial action that had been planned for May 25-26.

Nearly £27 million is being invested in network improvements over the spring bank holiday weekend – a time when passenger numbers can drop by 20-30% - although NR says that over 95% of the network will be unaffected by the engineering work.

NR Chief Executive Mark Carne said: “Our improvement programme this bank holiday, delivered by a 14,000-strong army of rail workers, is focussed on delivering a better service for passengers.

“We are acutely conscious that many people want to use the railway over the bank holiday to reunite with their friends and families, which is why the vast majority of the network is running normally over the long weekend.

Carne added: “We’d like to apologise to any passengers whose plans are affected by our improvement work, but hope they will understand that this is a quieter time on the railway and we want to minimise the overall impact of these vital projects on passengers.”

Thameslink programme: Track and signalling improvements at London Bridge will mean London Charing Cross, London Cannon Street and Waterloo East stations will be closed on Saturday 23, Sunday 24 and Monday 25 May. Southeastern services will also not serve London Bridge except for trains to and from Hastings. Trains will be diverted to either London Victoria or London Blackfriars with some trains starting their journey at New Cross.

Swindon: The final stages of a major signalling upgrade around Swindon station are being carried out on May 23-24. No trains will be able to call at Swindon over the weekend, with trains running via a diversionary route to destinations in south Wales, the west and south-west of England.

Midland Main Line (MML): On May 23-24, Bedford-Leicester trains will not run while track is renewed south of Leicester, and a key junction is renewed at Bedford. East Midlands Trains will be running an amended timetable, with a reduced service running between Bedford and London St Pancras International.  Replacement buses will run Leicester-Market Harborough, Kettering-Wellingborough-Bedford to connect with trains. On Sunday only, buses will replace Nuneaton-Leicester CrossCountry trains.

On Sunday 24 May track renewal work is also being carried out between Kettering and Leicester. East Midlands Trains will operate a reduced service and CrossCountry services will not run between Nuneaton and Leicester with buses replacing trains.

Scotland: Several projects across the WCML and Lanarkshire commuter routes will renew and maintain track and drainage, while a road-over-rail bridge will be replaced at Newton, Lanarkshire. The work will take place between May 23 and the early hours of May 26.

West Coast Main Line: New signals are being installed and a change to the track layout will take place at Stafford as part of the £250 million Stafford Area Improvement Plan which will remove the last major bottleneck on the West Coast main line. A new rail-over-rail flyover at Norton Bridge will separate fast trains from slower freight trains. Buses will replace trains Stafford-Wolverhampton and Stafford-Stoke, while some long-distance train services will be diverted.

Between Crewe and Wigan, track is being renewed and trees will be removed from the trackside to improve safety and performance.