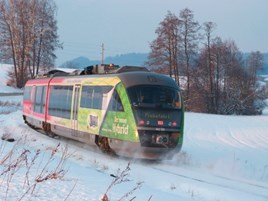 Tri-mode running may soon be possible in a diesel multiple unit (DMU), thanks to a new MTU hybrid PowerPack that has successfully completed testing in a Deutsche Bahn train in Germany.

The new PowerPack combines diesel running with the ability to run from the overhead lines, as well as charging a battery that is then used to reduce fuel consumption by the diesel engine, by up to 25%.

“It is a truly universal product,” said David Eaton, MTU senior manager for rail. “You can operate it on electrified lines, non-electrified lines, and have the advantage of energy recovery to charge the battery.

“It’s getting as close to green technology as you can, while still burning diesel. So we’re burning as little diesel as possible and harvesting back wasted energy.”

The PowerPack is compliant with European legislation to 3B standard, which is a more stringent emissions limit than for current DMUs (RAIL 754-756), but can potentially go further than this.

Eaton told RAIL: “The idea is basically to save fuel and to be kinder to the environment. With cars going hybrid, instead of using mechanical brakes to slow it down, as you brake the vehicle you have to use energy to brake, and that energy is dissipated in heat and is wasted.

“But with the hybrid PowerPack, you use the generator part of the engine to slow the train down. You then harvest the energy and pump it back into the batteries.

“As you go downhill, where normally you would be putting the mechanical brake on, instead it uses the resistance of the generator as it’s pumping power into the battery, to recharge the battery. You’ve therefore got free energy back to use.”

Eaton said that the batteries can be discharged fairly quickly, meaning that the diesel engine can shut off when it is not required. For example, when running into a station, the train could approach silently and idle without the engine running in the station, reducing emissions and noise pollution.

Battery and hydrogen power are prominent on Siemens radar