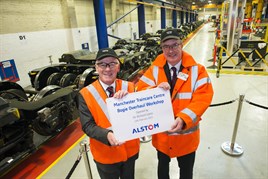 A new bogie overhaul facility at Alstom’s Longsight traincare centre in Manchester was due to open on February 11, as part of the company’s industrialisation strategy in the North West.

The facility will be used for Class 334s, ‘175s’ and ‘180s’, as well as already housing the heavy overhaul of Alstom’s Pendolino fleet. It will also be used for vehicles from other manufacturers, such as the ‘323s’ built by Hunslet TPL.

Up to 22 Pendolino bogie sets can be overhauled every week at the new site. This involves the bogies being washed and stripped, and the wheelsets, gearboxes, drop links, yaw dampers and other components exchanged. Around 60 new roles have been created as a result.

“This new workshop has been specially developed as a result of our experience and learning from the overhauls we’ve carried out over the years, and it is designed to optimise mileage between overhauls and to increase fleet availability,” said Alstom UK President Terence Watson.