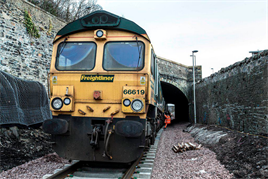 An engineering train working on track laying arrived in Galashiels on February 3 - the first time the Borders town has witnessed a train in over 40 years.

The track laying train began the day on the outskirts of Galashiels. By 1400 it had reached the town centre, where the new rail and bus interchange is being constructed.

The event was witnessed by hundreds of spectators as the team working with the train made its way towards Tweedbank, its final destination. Track laying is set to be complete on the project by 1700 on February 6.

The original Waverley Line closed to passenger trains in the late 1960s, and freight trains followed a few years later.