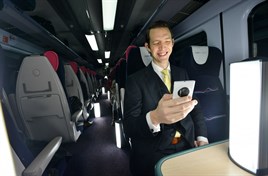 The train ran at 0706 from London Paddington-Penzance, fitted with bright SAD Lumie lights, which are said to help treat the condition.

SAD is a type of winter depression that affects an estimated half a million people every winter between September and April, and is particularly prevalent at this time of year. It is caused by a chemical imbalance owing to the shortening of daylight hours and lack of sunlight.

The special carriage will run daily on the 0706.

First Great Western Campaigns Manager Jamie Anderson said: “We are trying to shine a ray of light on people’s journeys, and help them arrive at work and travel home again without the ‘winter blues’.”

EXCLUSIVE: South West “not getting a fair share” - MP Pollard

“We have three engineering problems: resilience, journey times and capacity. All three need to be addressed.” MP talks EXCLUSIVELY to RAIL