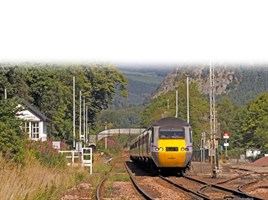 The franchisee that will take over ScotRail on April 1 2015 - the largest contract let by the Scottish Government - will “underpin Scotland”, according to Transport Scotland Commercial Director Bill Reeve.

The emphasis of the improvements to be delivered by Abellio will be on new electric trains on the Edinburgh-Glasgow route, with an order for up to 80 Hitachi AT200 three and four-car EMUs expected by 2018. In total rolling stock changes will mean an additional 23% more carriages for the franchise.

“Abellio is taking over a well set-up railway with a lot of successes to build on”, Reeve told RAIL on October 14, who said TS had spent time “to make sure we know what passengers want and then consulting carefully.” The process for defining the new franchise, said Reeve, was “key to an effective procurement.

“It pays dividends to do it properly,” he added. “But the proposition that high quality drives up franchise costs has not been our experience”.

Some 35% of the award was judged around quality, with particular areas of change in the next franchise focusing on the new longer electric trains on the Edinburgh-Glasgow route, as well as Dunblane/Alloa (the AT200 fleet), the Glasgow suburban electric routes currently operated by 1970s/1980s BR-era EMUs, and additional rolling stock to provide extra capacity.

New strategic changes include the transformation of the quality of the inter-city railway, with “differentiated and enhanced
First Class offers” and catering facilities better than that of the existing Class 170s.

Although the exact source has not been confirmed, it is thought that 27 First Great Western HST sets are likely to make their way to ScotRail once electrification is completed and IEP trains take over on the Great Western Main Line (GWML). The fully-refurbished HSTs, which will be fitted with Chiltern Railways-style power doors and accessible toilets for Persons of Reduced Mobility (PRM) compliance will provide a 20% increase in capacity, with the potential for significant journey time improvements between Scotland’s seven cities (Edinburgh, Glasgow, Aberdeen, Inverness, Stirling, Perth and Dundee).

The HSTs will include 54 power cars, and will be made up of 14 2+4 sets (two power cars, four coaches), and 13 2+5 sets (two power cars, five coaches). Jan Chaudhry, Abellio’s UK deputy managing director for Operations and Fleet, said that the unique advantage of the HST solution was that extra Mk 3 carriages would be available if needed. A buffet car or kitchen/galley coach would be included in the sets as part of the catering offer, which “as a minimum” would be the same as that currently offered by CrossCountry on its routes.