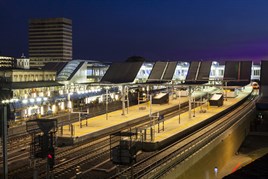 THE Queen officially opened the rebuilt Reading station on July 17. Arriving on a timetabled First Great Western train from Paddington, she met some of the hundreds of people who have worked on the £895 million, five-year project.

She was greeted by the great and good of the railway. During her 30-minute visit she named the new high-output electrification train built for Network Rail in Germany by Windhoff. Now called Brunel, it will be used to modernise the Great Western. She also inspected a model of the Hitachi Super Express train as she toured the new footbridge above the platforms.

After unveiling a plaque, she took the escalator down to the station’s new northern entrance. She met members of the public, some of whom had been waiting for hours. Then it was time for a group photograph with members of Network Rail’s ‘Orange Army’, resplendent in unusually pristine hi-vis jackets and trousers.

“It’s really emotional,” said one of them.

Another commented: “I’ve worked on this for four years, and I think we’ve done pretty well.”

A third beamed: “A good milestone for us - I was sitting right behind the Queen.”

Of the 100 workers selected to be pictured with the Queen, only one was a woman.

The Queen was escorted throughout by Robbie Burns, who as regional director has overseen the project for Network Rail.

“I think sometimes railway people are treated with a little bit of disdain, and it’s completely unfair,” he said. “The people who work for me work really hard and they are really proud of what they’re doing. And today was a manifestation of that for them, a chance to be recognised and to feel rewarded.”

It was the second time the Queen had opened a Reading station upgrade. She last visited 25 years ago, when she unveiled the £20m Brunel Plaza redevelopment. It now serves as the entrance for South West Trains services to Waterloo.

The new southern entrance alongside dwarfs both the 1989 station and the original station building, which is now a bar.

With more than 15 million passengers a year, Reading is one of the biggest rail interchanges outside London.

Workers were still laying the pavement on the forecourt the night before the Queen’s arrival, and the station itself is not yet complete.

It now bears little resemblance to the shabby old buildings that have gradually disappeared from view. No longer does every westbound service from London have to share a single platform. For decades, a delay at Reading has produced knock-on problems as far afield as Bournemouth, Plymouth, Cardiff and Manchester.

“It is a step-change from the facilities we had before,” said Mark Hopwood, managing director of First Great Western. “We’ve added four through platforms and each of those can be used in two halves, which gives us a lot of flexibility. The main complaint from passengers at Reading was how long they spent waiting for the train to get on to a platform. We’re on our way to resolving that. Just this morning we were looking at a graph showing the delays at Reading, and that graph is now heading down.”

Network Rail estimates passenger numbers through Reading will double from 15 million this year to 30 million in 2030.

Chairman Richard Parry-Jones said: “This is a proud moment for the entire rail industry. Brunel’s railway is an engineering marvel, but Reading has been a bottleneck on the line almost since the day it was built.

“The scale of the new station here at Reading reflects the huge and growing demand for rail travel in Britain and it has already started to deliver a better experience for passengers.”

NR has taken over management of the station from FGW, which had operated it since privatisation in 1996.

Reading Borough Council aims to use the project as a catalyst for town-centre regeneration. It says more than two million square feet of office space within five minutes’ walk of the station will be completed in the next 12 months. It claims that office occupation costs in Reading are 60% lower than in west London.