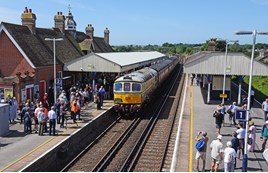 Timetabled passenger services between Wareham and the seaside resort of Swanage in Dorset resumed on June 13, for the first time since British Rail closed the branch line in 1972.

Four return trips a day will operate for 60 days this summer across Network Rail and heritage railway tracks, in the first season of a two-year trial. Rolling stock and crew have been hired from West Coast Railways (WCR).

The service had been intended to start last summer, but delays with both infrastructure work and Swanage Railway’s own rolling stock led to a year-long postponement.

Improvements to meet main line standards have proved more time-consuming than anticipated, so WCR provided a Class 33 and a ‘37’ locomotive to haul four Mk 1 coaches. Swanage Railway plans to use its own diesel multiple units next year.