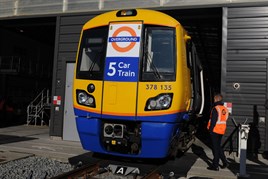 All 57 EMUs in the fleet are receiving an extra carriage, as part of a £320 million investment boosting overall capacity by 25% - equivalent to an additional 170 passengers per train.

The new vehicles are being built at Bombardier’s Litchurch Lane factory in Derby, and inserted into the existing four-car units in London.

The rollout of the extended ‘378s’ will begin on the East London Line, and will be followed by the North and West London lines, with the fully extended fleet in place by the end of 2015.

Transport for London says the Gospel Oak-Barking line will have its current two-car DMUs replaced with EMUs by 2018, while passenger capacity on the Watford Junction-Euston line will be increased when the power supply is upgraded.