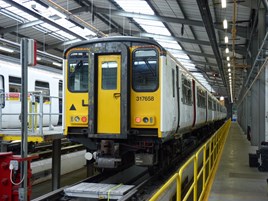 Greater Anglia has doubled the reliability of its Class 317 electric multiple unit fleet on the West Anglia route through Cambridgeshire, Hertfordshire and Essex.

The improvement has taken 15 months, and Ilford’s engineers are seeking to average 20,000 miles between failures on a consistent basis. The most common faults that cause delays or cancellations are with doors and traction motors.

“Our team set about researching the most commonly occurring faults. Following a sustained focus on finding permanent solutions to them, we have seen a month on month improvement in the trains’ performance,” said GA Engineering Director Colin Dobson.

“The team has therefore already hit its target of doubling the number of miles between faults, for the last three months, consecutively.”