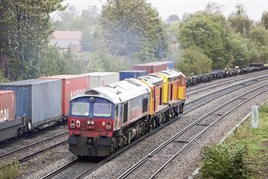 Recently repatriated 59003 Yeoman Highlander has been taken to Eastleigh Works for modifications, ahead of entering traffic in January. The Class 59 arrived in the UK at the Port of Immingham on October 10, following a difficult journey from Profen in Germany.
GB Railfreight confirmed to RAIL in August that it had bought the locomotive and expected it to be operable in the UK by December (RAIL 755). When acceptance paperwork was formally signed in Profen on August 19, it was estimated that it would enter the country through the Channel Tunnel on September 6.
However, authority was needed to move the locomotive on SNCF’s network in France, because of differences in the bogies from the Class 66 that necessitated further certification. By September 19, the ‘59’ was still unable to pass through France, and it was instead hauled by Deutsche Bahn to Cuxhaven, arriving there on October 4.

CAPTION: On October 13, GB Railfreight 59003 Yeoman Highlander is hauled through Derby by Harry Needle Railroad Company 20311 and 20314 on its way to Eastleigh. STEVE DONALD.