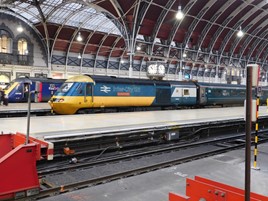 High Speed Trains operating for GB Railfreight are once again being considered as an option by the operator.

Initial discussions revealed early last year (RAIL 820) came to nothing. However, GBRf Managing Director John Smith has now discussed in more detail how the trains could be used.

Speaking at a stakeholder event in London on October 9, Smith said: “HSTs may come to fruition. We could run into London in the middle of the night, but there needs to be a strategic thought in terms of where they actually serve - perhaps somewhere near the North Circular?”

He said that the rail freight industry has yet to grasp how to serve cities and to compete with the ‘white van man’, and that HSTs were a good way to tackle this problem.

“We will look at ways of delivering high-speed freight into our cities. Other operators have been into London, but as an industry we need help,” he said.
Smith told attendees that if the industry received the backing it needs, then he was prepared to invest capital: “We have probably spent £400 million of our own money on trains, wagons, locomotives and people. If we are successful then we will invest.”