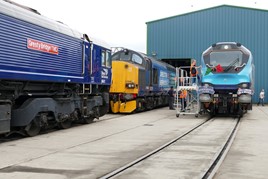 Speaking to RAIL at the Crewe Gresty Bridge open day on July 21, Managing Director Debbie Francis explained that DRS has progressed through analysis of pre-qualification submissions for ten new mixed traffic diesel locomotives that were the subject of an advertisement in the Official Journal of the European Union last year.

She was tight-lipped about who will be invited to tender for the contract, but this next stage of the process will take place later this year with a contract expected to be awarded by March.

The fleet additions will primarily be for freight and nuclear traffic. Like 68033/034, they will be owned by DRS and not leased from Beacon.

The new locomotives will lead to a reduced need for heritage diesels (Classes 20, ‘37’ and ‘57’), although no decision has been taken on what impact this will have on the older locomotives.