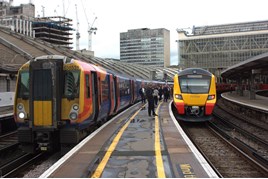 The ‘707s’ were ordered by South West Trains in September 2014 as part of a Government plan to increase capacity on the SWT network. Costing £210 million and funded by Angel Trains, the first ‘707’ was unveiled in Germany last year, but only ten of the 30 have so far been delivered. One pair operated one train for SWT on August 17, but this was their first booked regular work. A second pair will enter traffic on September 25. They will leave the SWR franchise when new Class 701 Aventras are delivered.