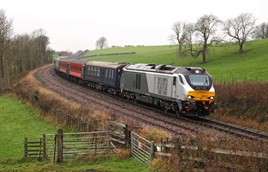 Direct Rail Services 68014 made history on December 6, when it hauled a Newport-Leeds charter.

Organised by Pathfinder Tours, the 'Yuletide Yorkshire Explorer' charter was the first to be hauled by one of DRS' brand new locomotives. While two '68s' have hauled passenger trains in Scotland (68005/006) these were in connection with the Ryder Cup and the trains were only available to those with tickets to the golf tournament.
Destined for hire with Chiltern Railways, 68014 was rostered for the train, which ran via the West Coast Main Line to Carnforth before heading for Leeds.
There are 15 Class 68s in the UK, with ten more still to be delivered. Six (68010-68015) are destined for use with CR via a hire agreement. These are due to be in full squadron service in the next few weeks, with 68011 thought to be hauling its first trains this week.
A Class 68 is booked to attend the Mid Norfolk Railway diesel gala on December 27/28 too.