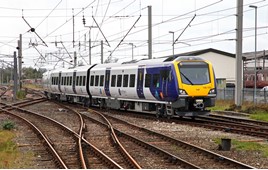 So far, two of the DMUs are at Edge Hill for testing and commissioning, and three-car 195103 undertook the first test, running from Crewe-Carnforth. Two-car 195002 is also at the site.

“Track testing of the vehicles in the UK is yet another milestone, and takes us a step closer to their launch into passenger service,” said CAF UK Director Richard Garner.

Northern Engineering Director Ben Ackroyd said: “The first of the new trains arrived in the UK in June. We’ve received a further three since then and we now have two of each type of train here for testing. It’s very rewarding to see the fleet coming together, and the start of the UK track testing is really bringing the project to life after months of design and construction work.”

In total, there are 25 two-car and 30 three-car Class 195 DMUs on order, financed by Eversholt Rail, plus 31 three-car and 12 four-car Class 331 electric multiple units.

The DMUs have been ordered to replace the Pacers and enable an internal cascade of existing DMU fleets. They are being built in northern Spain by CAF.