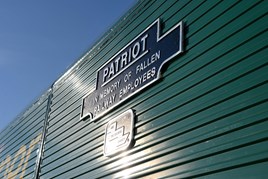 On November 11, Armistice Day, Freightliner 66418 was named Patriot in honour of railway workers who lost their lives in World War 1.
The naming ceremony, which took place at Freightliner’s new maintenance facility in Crewe, was attended by more than 40 people, including Graham Wood, whose grandfather, Wilfred Wood VC, a former employee of London North Western Railways, was awarded the Victoria Cross on November 28 1918 for conspicuous bravery and initiative on the Italian front against Austro-Hungarian forces in World War 1.