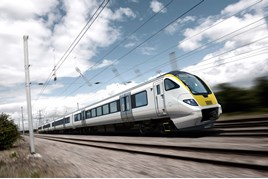 Angel Trains will finance 665 new Aventra vehicles for the Greater Anglia franchise, in an £869 million deal.

The order was confirmed on September 30, and forms part of the GA franchise awarded to Abellio on August 10 (RAIL 807).

The new trains will be delivered between January 2019 and September 2020. Commonwealth Bank of Australia (CBA) will partner with the rolling stock leasing company to fund the trains.

Bombardier will build 22 ten-car electric multiple units and 89 five-car EMUs at its Derby Litchurch Lane facility, while the manufacturer has also signed a separate deal to provide ongoing maintenance services support for the trains. This will run for seven years and is valued at £83m.