GTR to run Thameslink Class 700 EMUs in “next few weeks” 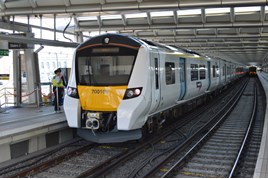 The first Siemens Class 700s will enter traffic in “the next few weeks”, according to operator Govia Thameslink Railway (GTR), which launched the first of the 115 electric multiple units (12-car 700109) at Blackfriars on May 24.

GTR is currently taking delivery of the trains, which were ordered by the Department for Transport following a lengthy procurement process.

They are designed as high capacity trains that are 50% longer than many of the trains that they will replace, and able to carry 1,754 people. The trains are designed to serve Gatwick and Luton Airports as well as the ‘core’ in central London between London Bridge/Elephant & Castle and Kentish Town, where 24 trains per hour will operate in each direction from December 2018.

GTR said that the design was essential to meet huge passenger growth, which has soared by 40% in the past decade. The trains feature wider doors and aisles, to make getting on and off easier, as well as spacious walkways between carriages made possible by the removal of vestibules.

Messages including: ‘It’s OK not to be OK, ‘We’re with You’ and ‘Don’t suffer in silence’ unveiled at four GTR stations to show support for passengers and staff

A strange sensation watching the National Rail Awards from home this year but unmissable as always.... with an extr… https://t.co/qpqKbVWtq1