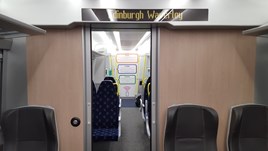 Two weeks after it unveiled the Class 385 bodyshells, ScotRail has revealed the interiors of the Hitachi electric multiple units it will introduce into traffic from next year.

A full-size mock-up of the ‘385’ has gone on display at Edinburgh Waverley. It was unveiled by Scottish Transport Minister Derek Mackay on February 10 and remains on display until March 4.

Phil Verster, managing director of the ScotRail Alliance, said: “This model that we are unveiling today gives our customers a glimpse into a future that, by next autumn, will be a reality. When we have them in service, they will transform travel between our two biggest cities.

“In just a few weeks our engineers will start work at Queen Street station that will allow us to run these amazing new trains. I know that when people see this model of their new train, they will understand the huge benefits that are heading their way.”

The mock-up shows Standard and First Class saloons, including some of the actual seating and tables that will be used when the first ‘385s’ enter traffic in autumn 2017.