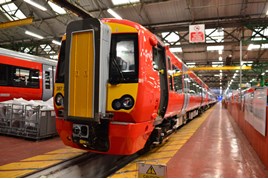 Class 387/2s will enter traffic with Gatwick Express on February 29. The first of 27 four-car dual-voltage Electrostars will begin running between London Victoria and Gatwick Airport, replacing the Class 442s currently operating on that route.

The ‘442s’ will be gradually withdrawn and sent off-lease by Govia Thameslink Railway (GTR), which operates the GX route.

The £145 million fleet of ‘387/2s’ is owned by Porterbrook and is currently being built by Bombardier at Derby Litchurch Lane, with the final train (387227) due to be delivered at the end of March. Each train takes four days to build, after which testing is carried out on the West Coast Main Line.

Gatwick Express eases back into business

Gatwick Express eases back into business