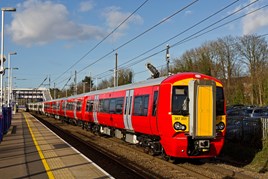 GTR spokesman Roger Perkins explained: “The ‘387/2s’ are scheduled to be introduced to Gatwick Express later next month in line with our driver training programme.

“However, there was an opportunity for Thameslink drivers, who are already trained to drive the very similar Class 387/1s, to operate these earlier (unbranded), and bring to Thameslink passengers the considerable benefits these modern trains offer when compared with the older Class 319s still operating on that route.”