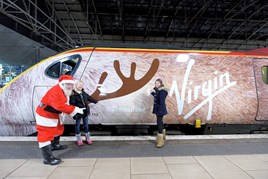 Virgin Trains has partnered with children’s charity the Book Trust to launch a nationwide competition for a Christmas Train design.

Primary schoolchildren are being asked to send in drawings and win the chance to see their design transform a Pendolino and a Class 91 and Class 82 set in December. The designs will be judged by a panel headed by author Jill Murphy, and the winning entry will adorn two trains that will travel on the West Coast and East Coast Main Lines.

Virgin Trains Chairman Patrick McCall said: “Last year’s Traindeer was such a hit with our customers that we wanted to make this year’s Christmas Train even bigger.”

The competition is open to children aged five to 11 and is open until midnight on October 9. A shortlist will be announced during the week commencing October 26, and the winning design will be unveiled on December 1.

Network Rail has commended its latest Christmas and New Year engineering period as a great success,

Rail workers can be a ‘Samaritans Christmas Star’

The rail industry is being encouraged to support Samaritans’ latest Christmas campaign by nominating and celebrating their own ‘Christmas stars’.