Campaigner is the first ‘passenger’ on new Borders line 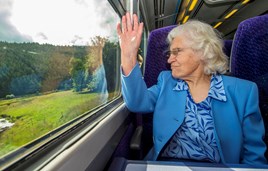 Campaigner Madge Elliot MBE was the first passenger to travel on the soon to re-open Borders Railway on July 26.

In 1999 Elliot helped found the Campaign for Borders Rail, a grass roots group that pushed for the restoration of rail services to the Scottish Borders.

Accompanied by her husband Bob, sons Kim and Sean, and other friends and family, Madge joined a training service at Tweedbank station.

Her elder son Kim said: “We’re delighted to be among the first people to travel on the new Borders line, as this railway is so important to our family.

“Experiencing the route first-hand is something we’ve all been looking forward to since the Borders Railway deal was concluded in 2012, and it’s great to see my mother being honoured for the role she played in the re-opening of the line.”

Scottish Infrastructure Secretary Keith Brown said: “It was a real privilege for me to meet Madge when we named a locomotive in her honour, and to put her forward to experience the route before it opens.

“Madge Elliot is a legend of the Borders and the railways, and it is absolutely fitting that she be the first member of the public to travel on this line as she was so instrumental in having it reinstated.

“We’re now only weeks away from seeing what will be a truly historic event in the opening of the Borders Railway, with all of the benefits that will bring. I look forward to joining Madge and the rest of the Borders, Midlothian and Edinburgh communities for that celebration.”

Caledonian Sleeper MD to leave post once replacement is appointed

Despite revenue of almost £1 billion, ScotRail posts an operating loss

@TimKingShrops @RAIL Hi Tim. It was a pleasure to write, and Jeffrey certainly is one of a kind...