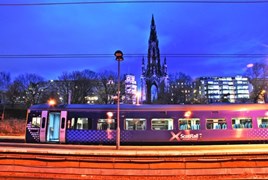 The station’s original ironwork features have been repaired and repainted, while non-essential station furniture, buildings and redundant high-level walkways have been removed permanently.

From the roof itself, for which work started in January 2009, the old glass was taken out and recycled into wire wool. The new clear, strengthened glass panes will last 25 years, shedding new light on the station concourse and platforms.

“But more than 25 years will be got out of the paintwork, too,” adds Brown. A whole series of tests have been carried out on the glass, which is laminated and shatter-proof.

Underneath, platforms were recoped, regraded and resurfaced, in order to comply with Disability Discrimination Act requirements.

However, this is not the end of the investment. New Class 800/801 trains that are being built as part of the Intercity Express Programme (IEP) will require additional platform capacity at Waverley, something for which Network Rail is already planning. The idea is to extend Platform 13, with work due to start later this year.

Increasing platform capacity goes some way towards restoring the former capability of the station, which at one time had 21 platforms in use. Only 18 are in use today.

Of the former Platforms 6 and 7, the latter survived to become Platform 4, while former Platforms 8 and 9 were substantially shortened for use as a Motorail terminus, with the infilled area becoming a car park. The demise of Motorail services means that these platforms are now used only for locomotive stabling - specifically Class 67s used on the Highland portions of the Caledonian Sleeper services and as ‘Thunderbird‘ rescue locomotives.

In the 2006 reconfiguration the numbers 5 and 6 were reserved for the old Platforms 8 and 9, with extension as full-length platforms due to take place to accommodate terminating CrossCountry and Virgin Trains East Coast services. The taxi rank was closed in June 2014 to make way for these works.

The former Down Main through Platforms 7 (east end) and 8 (west end) are at the south side of the main station, and comprise a single very long platform with a crossover in the centre. They are numbered Platform 7 (formerly Platform 10 at the east end) and Platform 11 (at the west end). Improvements to the current Platforms 8 and 9 have included new canopies and station furniture.

Also included in the overall package of improvements was the Waverley Steps redevelopment - the link between the station and Princes Street that is used by some five million people every year. NR created a modern, landmark entrance from Princes Street, leading to two sets of covered escalators and two 16-person glass lifts giving step-free access to all platforms via a mezzanine bridge. A glass and steel canopy was also installed over the newly refurbished steps.

One of the more pleasing results of the whole programme of work is that a farmers’ market has now opened up in some of the space close to the operations depot building - adding to the refreshed and reinvigorated feel of the station. The space now exists for such activity to be organised freely without impeding on the essential operation of the railway station.