Why Brockenhurst conquered the competition 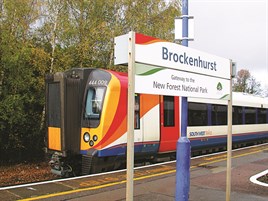 What do you do when you’ve conquered a country? Well, in the 11th century you established a hunting forest, which is what William the Conqueror did in 1079.

A thousand years ago, William’s ‘New Hunting Forest’ in Hampshire was very different. Much of the vast stands of English oak which William would have seen, were cleared to build Henry VIII’s ‘Hearts of Oak’ ships for his embryonic British Navy.

Today’s New Forest is a mix of pasture and woodland, still significant enough to be the country’s first National Forest Park - an area not of dense forest, but of clumps of trees and woodland, and wide expanses of heath covered with heather and gorse.

The gateway to the New Forest is the ancient village of Brockenhurst. Like so many towns and villages on tourist trails, Brockenhurst suffers constant heavy traffic, so the best way to visit is by rail and then make use of the extensive walks and cycle rides available in the area. You can even hire a bike at the station, just a few yards from the down platform.

The first railway to serve Brockenhurst was the Southampton & Dorchester. A circuitous route via Ringwood, it became known as Castleman’s Corkscrew after the Wimborne solicitor who was the moving force behind it. The engineer was Capt. W. S. Moorsom, who had worked with Stephenson on the London & Birmingham Railway in the early 1840s before going on to complete the ‘Corkscrew’ for opening in 1847. Brockenhurst became the junction station for a branch line to Lymington in 1858, and from here a Pier station served ferries to Yarmouth on the Isle of Wight.

The growth of Bournemouth as a holiday resort led to further rail service improvement to the town, with the opening of the ‘direct line’ via Christchurch in 1888 increasing the importance of Brockenhurst’s station considerably. The ‘Corkscrew’ route west of Brockenhurst closed under Beeching in 1964, but Brockenhurst continues to be the busiest of the stations in the New Forest. The Lymington branch escaped closure and was electrified, becoming, in 1967, the last steam-operated standard gauge branch line in the UK.

When I paid the station a visit in November, having had to postpone the trip on several occasions in the preceding weeks, I found myself travelling down to Waterloo on a day which varied from thick mist to bright sunshine, black skies and pouring rain. (One gets the best impression of a station, staff and passengers on a bright, sunny day. If the impression is still good when the weather isn’t, then that’s really good!)

My memories of travel out of Waterloo date from Network SouthEast days and feature overcrowded rattletrap slam-door trains with very poor springing. The ‘Desiro’ is an excellent train. The Class 444 unit on which I travelled down to Brockenhurst was quick, smooth and quiet, and the seating was comfortable. Certainly much better than the East Coast’s Mk 4s, with their impossibly uncomfortable seats.

At Brockenhurst the South Western main line is double track and the station has a somewhat unusual track layout. Single track loops from both up and down lines create two island platforms with four platform faces. The up loop separates the platform from the ticket office and means that passengers must use the footbridge (a covered structure dating from LSWR days) to reach either of the island platforms. The down loop is similar but on this side the line separates the platform only from the car park and a covered walkway, which shelters a touch-screen ticket machine.

Platform 1 (the up loop) is used mainly for stopping trains formed of four-car Class 450 ‘Desiros’ operating the all-stations stopping service from Brockenhurst to Poole. On the down side, Platform 4 serves the shuttle service on the Lymington branch. This is currently operated as a heritage branch line, using three-coach units formed from Class 421 vehicles built for the Brighton line.

Platforms 2 and 3 serve the up and down through lines, and the main services which call are SWT Waterloo-Weymouth trains on an approximately half-hourly cycle using Class 444 electric units. These are interspersed with CrossCountry Class 220 Voyager diesel units operating between Manchester and Bournemouth, again approximately hourly during the day. There are also some ‘short’ workings to places such as Farnborough, providing a slower, stopping service in the up direction. Such is the frequency of services calling at Brockenhurst that I saw no through, non-stop trains during my visit.

The result is that Brockenhurst sees fairly constant activity. I arrived soon after 1100 and was able to observe station operations until my return on the 1445 departure to Waterloo. During that time trains arrived and departed every few minutes on the main line, while the Poole ‘stopper’ had quite lengthy layovers on its hourly service, and the Lymington shuttle slipped in and out unobtrusively. Unit 1497, named Freshwater, was providing the half-hourly departure to Lymington Pier, the journey taking 10 minutes each way with about five minutes layover at each end.

Bearing in mind that the station received the NRA award for its helpful and customer-focused staff, one might expect a larger staff with more time to spare for such niceties, but they do it despite being busy.

The platform work, overseeing the passengers and the departure of trains is largely in the hands of one person, with the support of the station supervisor. Otherwise, there’s a booking clerk and a lady who runs the small shop on Platform 2. Incidentally, the sandwiches are very good  - not the usual chain-store, factory-packed fancy stuff. Good old cheese and pickle - nice and fresh!

The platform operation keeps the staff busy with trains arriving and departing every few minutes, leaving little time for those ‘optional extras’ which clearly helped to win Brockenhurst its award. Station Supervisor Richard Yates was on duty while I was there and was multi-tasking, watering the window boxes, as he talked to me. Regular passengers are greeted like old friends, but even strangers such as myself find the staff approachable
and obliging.

I was particularly keen to see the Brockenhurst ‘swing bridge’ which was mentioned in the judges’ comments: “The difficulties of providing access to the island platforms for the less mobile have been overcome by retaining the use of a barrow crossing and a swing bridge......” (see panel page 67).

Having failed to spot this feature, largely because I couldn’t visualise how it might look, I enquired. “Ah, yes, the traverser.” He took me to the eastern end of the up platform and duly explained the workings of this useful anachronism.

I’ve long had a particular interest in railway architecture, and it was good to find that Brockenhurst is a mixture of original 19th century structures and classic Herbert Walker-era Southern Railway modernisation. The down side building is a particularly good example of the brick-built, rounded-end, 1930s design, housing waiting room and toilets. The up side buildings are older, probably original, with a 1930s-era extension to the canopy at the west end.

I watched the rain cascade off the old canopy and mused that the ancient dog-tooth wooden valancing must be suffering from that amount of soaking. The next day, while researching this article, I discovered a photograph which shows the same woodwork nearly 100 years ago, as First World War wounded New Zealanders lay on the platform.

It is no easy task to keep these older structures presentable, and Brockenhurst succeeds through the efforts of staff in keeping the main public areas neat and tidy. Even in winter they are enhanced by window boxes, but away from the platform areas there’s no disguising a few shabby corners.

As lunchtime approached the centralised station announcements began to warn that the 1315 CrossCountry service to Bournemouth had been delayed by a fallen tree at Shawford. There must have been some nifty work with a chainsaw, because it duly arrived only some 20 minutes ‘down’.

In the meantime, the 1316 ‘stopper’ to Poole, which would normally provide a connecting onward service to the smaller intermediate stations, was held to make that connection – an example of good old-fashioned station working and old-style customer service as it should be. Great.

Despite my assertion that I had come to see Brockenhurst at work, Richard was keen that I should take a trip down to Lymington. “He’s painted the station green. It’s really good! You should see it.”

So I duly boarded the ‘heritage’ Class 421 for the five-and-a-half mile trip through the forest and down to the coast. Can these units really be ‘heritage’ and last survivors? I remember them when they were new!

I was told that the substitution of a Desiro for one weekend caused howls of protest,
and that many of the branch customers come just to ride the heritage units. The latest news is that they are due to be replaced from
May 2010.

For the first mile, the branch runs beside the main line, to the site of Lymington Junction, where it turns south. Almost immediately the scenery is ‘classic’ New Forest, with wide expanses of brown heather and dark green gorse bushes. The native New Forest ponies are plentiful - indeed, houses near Brockenhurst station have big gates and even cattle grids (presumably the ponies sometimes come into town!).

The branch is single track with no passing places and only one intermediate station, at Lymington Town. The platform is short (and low!) and the handsome station building is all green and gables and nicely restored to a Southern-ish appearance.

Scarcely a half-mile further on is Lymington Pier, a short, modern platform with nothing but a couple of shelters. At this point the rain was falling in sheets and I stayed aboard during the short turnaround. Beyond the stop block the WightLink ferry to Yarmouth is so close to the train that it looks almost like a very modern station building across the end of the line.

By the time I got back to Brockenhurst, the sun was out, tempting me to try a second trip down the branch, and I bought my ticket from one of the touch-screen machines. A self-confessed technophobe, brought up on chocolate vending machines that took your money and never gave you the goods, I was delighted to find these modern ticket machines versatile, simple to use and reliable.

Like Brockenhurst, Lymington is a small, old world town well worth a visit on foot or bicycle. Road traffic in both places is heavy, and it is best to take advantage of walking and cycling facilities in the area. At Brockenhurst a cycle hire firm operates from a GUV utility van in the station car park, providing perfect opportunities for travellers from further afield to enjoy the New Forest without taking the car.

I could have spent longer watching the comings and goings at Brockenhurst. Next summer could well find me back to do a bit more exploring around this award-winning gateway to the New Forest.

Entries for this year's 'Railway Oscars' are now open