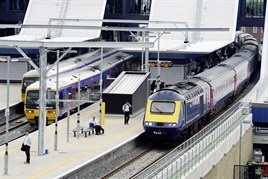 Of all the stations that I’ve visited on my UK travels, none has undergone quite such a colossal transformation as Reading.

Almost all the old structures - including the track layout, depot and signalling - are being swept away in a massive £850 million redevelopment that doubles the capacity of this major junction. It’s a tremendous vote of confidence in the railway’s future.

The first station at Reading was opened on March 30 1840, as the temporary western terminus of the Great Western Railway (GWR). A year later, the line was extended to its intended destination, Bristol. New routes soon spread from the original London to Bristol line, with the line from Reading to Newbury and Hungerford opening in 1847, and the line to Basingstoke in 1848.

In 1844, the four-storey Great Western Hotel was opened on Station Road. It’s reputed to be the oldest surviving railway hotel in the world. After a period as offices, it was re-opened as the Malmaison, a glamorous four-star hotel with its own collection of railway memorabilia and a model railway in the brasserie!

In 1860 the GWR constructed a new station building in Bath Stone, and which incorporated a clock tower. Listed as Grade 2, this is the only original building to survive the current modernisation, although for many years now it has been a popular pub - the Three Guineas.

In 1898 the single-sided station was replaced by a conventional design, with ‘up’, ‘down’ and ‘relief’ platforms joined by a pedestrian subway.

The station was originally named Reading, but became Reading General on September 26 1949 to distinguish it from the ex-South Eastern Railway station nearby.

Nowadays it has reverted to its original name, because from September 6 1965, services from the former Southern station were diverted into a newly constructed eight-car length terminal platform (4A) in the General station. This was less than ideal, so a second terminal platform (4B) was opened in 1975 ready for the start of the service from Reading to Gatwick Airport.

Further changes occurred in 1989, when a new station concourse that featured a shopping arcade named after Brunel opened on the site of the old Southern Railway station. This linked to the platforms by a new footbridge.

On the opposite (North) side a new multi-storey car park was built on the site of the former goods yard and signal works sites, and linked to the same footbridge.

Because of this, the Government’s 2007 White Paper - Delivering a Sustainable Railway - announced plans to improve traffic flow at Reading.

On September 10 2008 Network Rail unveiled a £400m regeneration and reconfiguration of the station and surrounding track, including a flyunder to the west of the station.

This would allow freight and passenger trains to reach the Berks & Hants and Basingstoke Lines from the ‘slow’ lines without having to cross the ‘fast’ lines on the flat. And because the existing Reading DMU depot was in the way, a new depot was planned on the site of the former West yard.

As well as the track and civils work, five additional platforms would be built and the platforms for Waterloo services lengthened. The Cow Lane Bridge under the railway would be replaced and made two-way, while incorporating a cycle path.

The capacity improvements would allow for at least four extra trains in each direction every hour, and for six extra freight trains each day.

In the end, following the announcement of Crossrail and Reading Council submitting schemes for the station area, the plans grew to encompass £850m of redevelopment.

On March 29 2013 the new transfer deck was opened. The largest element of construction, it’s a 30 metre-wide, 135 metre-long bridge built on the north side of the station before being launched over the tracks.

Designer Grimshaw worked with specialist fabricators to develop a modular canopy system. This has used prefinished, factory-assembled cassette panels with bespoke curved sections, to form the flowing canopy ribbons that give the station its distinctive new look.

On April 2 2013 the new northern through platforms became available, and the subway re-opened as a public right of way from the north to the south of the station (albeit with no access to the platforms). And by April 7 2013 the old footbridge had been completely removed.

Further improvements continue to be delivered, with work continuing to upgrade all of the platforms. Remaining platforms 1-3 and 7-11 are being refurbished, with lengthened platforms to create room for longer trains, new platform canopies, better waiting room facilities, customer toilets and retail outlets.

In the summer the newly lengthened Platform 11 entered into passenger service as Platform 10, and the new Platforms 10 and 11 are on target to fully open (complete with new canopies and upgraded facilities) by February 2014.

Work on the upgrade of Platforms 8 and 9 is taking place simultaneously. To ensure minimum disruption to passengers, these platforms are remaining in use while the phased upgrade works are carried out. Platforms 8 and 9 are due to complete by late spring 2014, with the entire Station Improvement Project due to be completed by summer 2015.
I visited the station back in August, and couldn’t believe the transformation.

I first got to know the place back in the early 1970s. Since then I’ve been a regular visitor, but when I step off the train from Paddington the scale of the transformation makes me feel like a complete stranger. The only familiar point of reference is the clocktower on the 1860 building, its yellow brick a stark contrast in architectural styles to the brash concrete and grey steel modernity that now surrounds it.

The cramped old footbridge across the station has vanished completely, with the only clue to its existence the surreal sight of a lonely and redundant (but still labelled) door in the side of the multi-storey car park.

Walking along a platform resurfaced with brick, I pause to inspect one of the new waiting rooms - although utilitarian, it is light with easy access, and well supplied with seats.

Eschewing the stairs for the adjacent escalator, I venture up to the new transfer deck, a vast and spacious area compared with its predecessor.